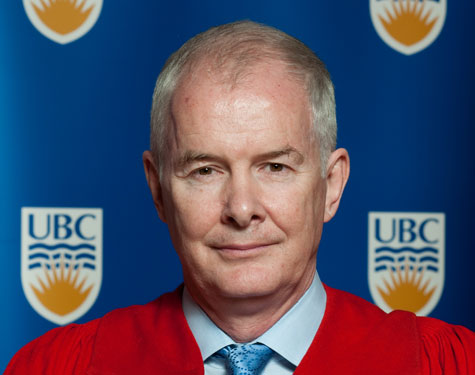 When John Furlong arrived in Canada more than 30 years ago from Ireland, a customs officer offered this greeting: “Welcome to Canada . . . Make us better.”

After the extraordinary lengths that Mr. Furlong took to ensure the 2010 Winter Olympic and Paralympic Games truly resonated with Canadians from coast to coast to coast, it is clear that he took those words to heart.

As CEO of the Vancouver Organizing Committee, Mr. Furlong realized early on that this was
more than simply a sporting event. It was an opportunity to show the world, and ourselves, the real Canada and to express the values of this great land.

Now, don’t get me wrong, there would be medals – including our first Gold on Canadian soil. And the most gold medals Canada had ever won. Yes, there were some truly unforgettable performances.

But for Mr. Furlong, it was also an opportunity to reach out to our First Nations, to produce the greenest games ever, and to strengthen communities with legacy venues like UBC’s very own Doug Mitchell Thunderbird Sports Centre. This facility has already become a new social and athletic heart for our campus and the surrounding community.

Of course, I’m just scraping the surface here on the monumental task John Furlong and his team had, including: the venues, the security, the ticketing, the negotiating, the sponsorships, the marketing, the broadcasting, the unforgettable opening and closing ceremonies.

Madame Chancellor, for his skilled leadership, and for helping to unlock unprecedented levels of national pride, I ask you to confer the degree of Doctor of Laws, honoris causa, upon John Furlong.