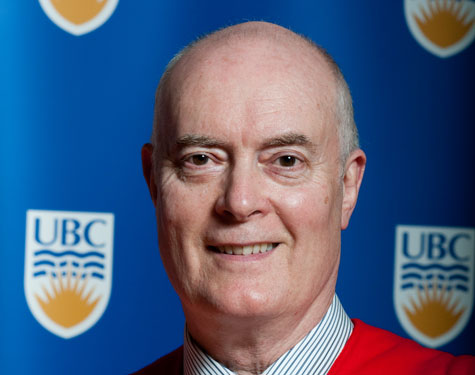 Vancouver enjoys a very strong reputation in creative and performance practice in the
international arts community. One of the important reasons for this is Ian Wallace, a Vancouver artist, art educator and scholar of visual and literary culture.

A pioneer in photo-based conceptual art, Mr. Wallace earned his B.A. and M.A. in Art History at UBC. He has become one of the most significant creative artists and thinkers on visual culture. He commands tremendous respect among artists, educators, curators, and collectors, all of whom acknowledge his distinction as a creative practitioner and critical thinker. His impact upon the development of both traditional and photographic conceptual art has been profound.

Nowhere is that impact more evident than in his former students. He has taught generations of art students both here at UBC and at the Vancouver School of Art, now the Emily Carr University of Art and Design. They include Jeff Wall, Rodney Graham, and Stan Douglas and others who are part of a group whose work has become known as the Vancouver School of conceptual art.

Because of this Mr. Wallace might rightly be regarded as a founder of the Vancouver School and a driver of our city’s reputation in the arts community.

Mr. Wallace helped establish the Or Gallery, a site of innovative art exhibition and discourse. He has also served on the Boards of the Contemporary Art Gallery and the Vancouver Art Gallery.

Madame Chancellor, for his fundamental role in reinvigorating visual arts education in B.C. and Canada, I ask you to confer the degree of Doctor of Letters, honoris causa, upon Ian Wallace.