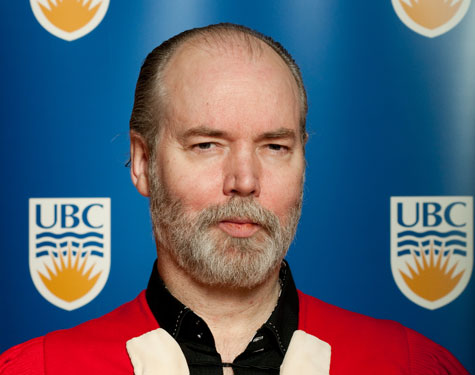 From Gen X to Gen A, Douglas Coupland deftly captures our life and times.

Mr. Coupland is celebrated in Canada and internationally for his ability to both distil and decode the world we live in.

He has published 18 major literary works, including 11 fiction and seven non-fiction works. Many of you will recognize titles that include, of course, Generation X, along with Microserfs, JPod, Hey Nostradamos!, Eleanor Rigby, City of Glass and Terry.

How fitting, then, that Mr. Coupland’s latest work is a biography entitled Marshal McLuhan,
published this spring as the latest instalment in Penguin’s Extraordinary Canadians series.

Since 2000, he has created or contributed to more than 20 major visual art projects, installations and exhibitions.

Some of that history is now available at UBC Library thanks to Mr. Coupland’s generous gift of his archival records. Dating to 1980, these records include manuscripts, fan mail, photos, visual art, correspondence, press clippings, audio/visual material and more.

Madame Chancellor, for his prolific and prodigious contributions as a writer and artist, and for his uncanny ability to inject new memes into our cultural bloodstream, I ask you to confer the degree of Doctor of Letters, honoris causa, upon Douglas Coupland.