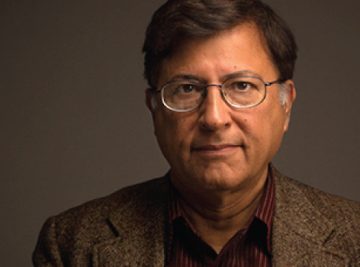 MR. CHANCELLOR, Pervez Hoodbhoy is one of Pakistan’s foremost scholars of Physics as well as one of its most revered public intellectuals and global citizens.

He is currently the Zorah and Z.Z. Ahmad Distinguished Professor of Physics and Mathematics at Forman Christian College-University in Lahore. Prior to this, he taught physics for four decades at Quaid-e-Azam University, widely regarded as the leading public university in Pakistan.

In addition, he has been an influential advocate for regional and global nuclear disarmament and the safety of nuclear weapons and reactors, issues of great significance amidst a background of troubling instability between Pakistan and India over the Kashmir region.

A complementary endeavour for Professor Hoodbhoy has been the defense of scientific rationality in the face of growing religious intolerance in Pakistan, where he has campaigned tirelessly to promote secular education and to combat radicalizing and militant religious education.

His expertise and counsel have been widely sought both within his country and beyond its borders, highlighted by his recent service as a member of the United Nations Secretary General’s Advisory Board on Disarmament Affairs.

Not surprisingly, he has been the recipient of numerous awards, including the Kalinga Prize for science popularization from the UN’s Educational, Scientific and Cultural Organization and the Joseph A. Burton Forum Award from the American Physical Society.

I am pleased to also note that in recent years he has played an inspirational role here at UBC at the Liu Institute for Global Issues.

Mr. Chancellor, in recognition of his courageous and insightful contributions to the science of Physics and to the cause of peace, I ask you to confer the degree Doctor of Laws, honoris causa, upon PERVEZ ADMIRALI HOODBHOY.