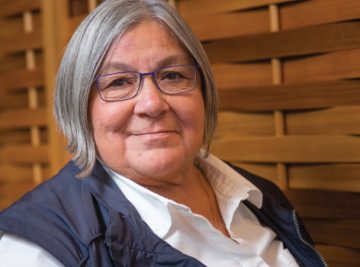 MR. CHANCELLOR, Leona Sparrow is a triple UBC alumna, a former UBC senator and multi-sport varsity athlete. She is also a member of the Musqueam Indian Band and one of its most longstanding and influential leaders.

She has served on the Musqueam Council, as the Director of Treaty, Lands and Resources, and as the designated liaison between Musqueam and UBC. A tireless advocate and champion for First Nations, she has contributed to the work of numerous Aboriginal service providers’ boards and committees, including the Vancouver Child and Family Services Society and the New Relationship Trust.

She has also been instrumental in supporting UBC’s transformation in its understanding and respect for Indigenous history, culture, traditions and knowledge.

Her guidance has been critical in UBC’s efforts to improve and expand its relationship with Musqueam and with other First Nations communities, and to the framing of UBC’s engagement with the Truth and Reconciliation process locally and nationally.

She has served on the President’s Advisory Committee on Aboriginal Affairs for more than ten years and from 1993 to 2003 was an appointed member of UBC Senate. She has also served on advisory boards for the Peter A. Allard School of Law, from which she graduated, the Museum of Anthropology, and serves as a member of the Board of Governors Indigenous Engagement Committee. In all instances, her guidance has facilitated a new and far more effective approach to working with First Nation communities, based on respect and productive collaboration.

Mr. Chancellor, in recognition of her leadership, service to her community, and of her thoughtful contributions that will continue to help guide the University’s future, I ask you to confer the degree Doctor of Laws, honoris causa, upon LEONA MARIE SPARROW.