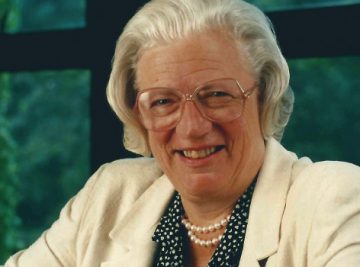 MR. VICE-CHANCELLOR, Hanna Holborn Gray is at once an eminent scholar and a pioneering role model for women in academic leadership.

She was born in Heidelberg, Germany in 1930 and as a young child immigrated to the United States with parents who were part of a generation of academics that fled Nazi Germany prior to 1939. She demonstrated academic excellence at an early age, enrolling at Bryn Mawr College in Pennsylvania at the age of 15.

After graduating, she travelled to Oxford as a Fulbright Scholar, with special interests in European church and political history in the Renaissance and Reformation. She subsequently earned a Ph.D. from Harvard and taught there for a time before accepting a faculty appointment at the University of Chicago.

Her ascent to prominence as an administrator began with her appointment as Dean of the College of Arts and Sciences at Northwestern University in 1972, and later as a professor of history and the Provost at Yale University in 1974.

She then served as Acting President of Yale for just over a year before returning to the University of Chicago to begin a 15-year term as President, thereby becoming the first female president of a major American university.

But this was far from a culmination point in her leadership journey. Her service to various institutions has been extensive, and includes the boards of Harvard University, the Howard Hughes Medical Institute, the Andrew W. Mellon Foundation, the Smithsonian Institution and Yale University, among others.

Mr. Vice-Chancellor, in recognition of a lifetime of scholarly achievement and leadership service, I ask you to confer the degree Doctor of Science, honoris causa, upon HANNA HOLBORN GRAY.