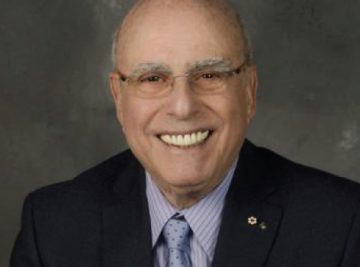 MR. VICE-CHANCELLOR, Dr. Phil Gold is a revered professor of Medicine, Physiology and Oncology at McGill University, a former Physician-in-Chief at Montreal General Hospital, and one of this country’s most distinguished medical scientists.

In 1965, he and a colleague co-authored a seminal paper on their ground-breaking discovery of carcinoembryonic antigen, the first clinically-useful human tumour marker and one that is found in 70% of cancer patients. It was a concept-shifting discovery and helped shape the modern era of cancer immunology and tumour markers. This marker remains the most frequently used blood test in oncology around the world today.

The impact of this discovery, along with other work in the Division of Clinical Immunology and Allergy at Montreal General Hospital, led to the establishment of the McGill Cancer Centre in 1974, where Dr. Gold was the inaugural Director, and which has evolved to become one of the top cancer research institutes in the country.

He is also an inspirational teacher. It has been said that his love for teaching, combined with his passion for medicine and science, has drawn universal admiration from his students. He has been instrumental in establishing national programs aimed at inspiring the next generation of clinician-scientists, and he has raised extraordinary sums of money for the McGill medical community.

Among countless awards and distinctions, he is a recipient of the Gairdner Foundation International Award; a Fellow of the Royal Society of Canada; a Companion of the Order of Canada; an Officer of the Order of Quebec; and a laureate of the Canadian Medical Hall of Fame.

Mr. Vice-Chancellor, in recognition of his distinguished scientific achievements, and for his extraordinary contributions as a physician, teacher, leader and humanitarian, I ask you to confer the degree Doctor of Science, honoris causa, upon DR. PHIL GOLD.