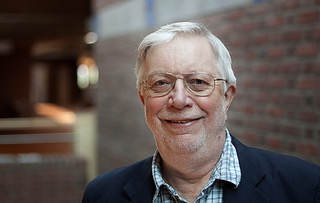 Among his peers he is famously renowned as one of the first to apply and refine William Labov’s sociolinguistic methodologies in the United Kingdom, and to provide a framework for studying dialect contact phenomena. He is known in the field today for his theory on the development of post-colonial varieties of English.  Working with multiple languages, he has carried out linguistic fieldwork in Britain, Greece and Norway, and has lectured in most European countries, Canada, the United States, Colombia, Australia, New Zealand, as well as numerous Asian nations including India and Thailand.

Mr. Chancellor, in recognition of a lifetime of distinguished and ground-breaking scholarly work, I ask you to confer the degree Doctor of Letters, honoris causa, upon Peter John Trudgill.