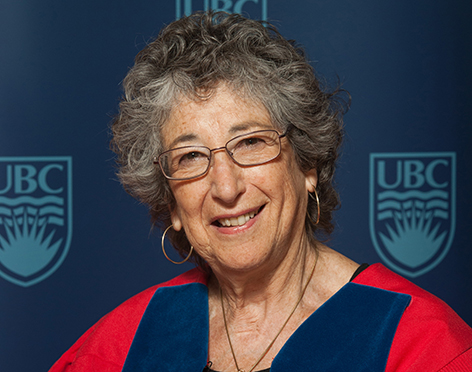 MADAM CHANCELLOR, after completing a Master’s degree in Communications from Stanford University, Bonnie Klein began an extraordinary 50-year career as a documentary filmmaker, author and disability rights activist. A native of Pennsylvania, she and her husband immigrated to Montreal in 1967, where she went to work with the National Film Board in Challenge for Change, a program that experimented with the use of media as a tool for social change. Over the next 20 years she produced and directed numerous films, but is perhaps best known for her documentary, Not a Love Story, a provocative and controversial examination of the pornography industry.

In 1987 her life and her work were irrevocably changed by two strokes, after which she was afflicted by “locked-in syndrome,” a rare neurological disorder that leaves its victims fully aware but unable to speak or move. After three years of intense rehabilitation, she emerged to become a passionate advocate for the disability rights movement. The 1997 publication Slow Dance: A Story of Stroke, Love and Disability is Ms. Klein’s candid account of her life-altering strokes and their aftermath.

After relocating to Vancouver in 1993, she co-founded the Society for Disability Arts and Culture, and is the producer of the KickstART! Festival, which brings isolated artists together to express their experience of disability in dance, comedy, music, theatre and visual art. She also counsels, consults and speaks about health care, rehabilitation and disability rights, and culture to health care professionals, disability organizations and the general public.

Her many honours include the Vancouver YWCA Women of Distinction Award in Arts and Culture, the Vancouver Woman of the Year in Film and Video Award, the Governor General’s Award, and her appointment as an Officer of the Order of Canada.

Madam Chancellor, in recognition of her many contributions to arts, culture, and the rights of the disabled, I ask you to confer the degree Doctor of Laws, honoris causa, upon BONNIE SHERR KLEIN.