In response to provincial directives regarding events and mass gatherings during the COVID-19 pandemic, virtual graduation ceremonies for the Class of 2020 and the Class of 2021 were held in June 2020, November 2020 and June 2021. Archived ceremonies for Vancouver graduates can be found here and for Okanagan graduates they can be found here . As the public health orders and guidelines in British Columbia change in BC’s Restart Plan, and as UBC continues to resume on-campus operations, more information about Fall Graduation will be made available at www.graduation.ubc.ca this summer. Please check back for details. 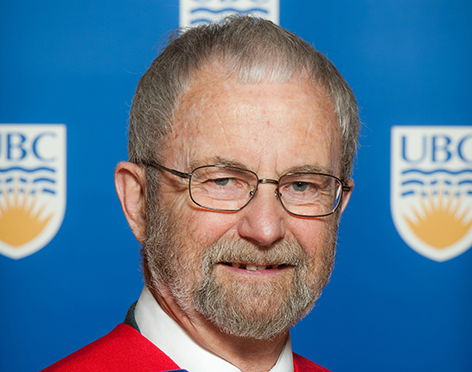 MADAM CHANCELLOR, for decades, Canadians have viewed polar bears as indomitable symbols of our Arctic regions.

In more recent times, however, UBC alumnus Ian Grote Stirling has been instrumental in teaching the entire world to view them as sensitive indicators of global climate warming, and to take seriously both their plight and its origins.

After earning his Bachelor and Master of Science degrees from UBC, Dr. Stirling ventured to
Antarctica to conduct research on Weddell seal populations. It was there on the barren sea ice that he took his first steps toward becoming one of the world’s foremost experts on high-latitude marine mammal ecology.

For these efforts, he earned a Ph.D from New Zealand’s Canterbury University. And though he has returned time and again to lead further studies of Antarctic ecosystems, it is his research on Canada’s polar bears that is particularly significant.

From 1970 to 2007, Dr. Stirling served as a research scientist for the Canadian Wildlife Service, for which he led the most extensive research program ever undertaken on polar bear ecology, population assessment, and the relationships between polar bears, seals and ice conditions.

The outcome of his scientific rigor and diligence, and that of the many graduate students he inspired along the way, has proven vital to the effective management of polar bears internationally.

The combination of his work, leadership and thoughtful participation on countless international
panels, boards and commissions has been frequently recognized, including by his appointment as an Officer of the Order of Canada and his election as a Fellow of the Royal Society of Canada.

Madam Chancellor, in recognition of his wisdom and guidance on critical pathways of natural history, and for his contributions to the global sustainability movement, I ask you to confer the degree Doctor of Science, honoris causa, upon IAN GROTE STIRLING.