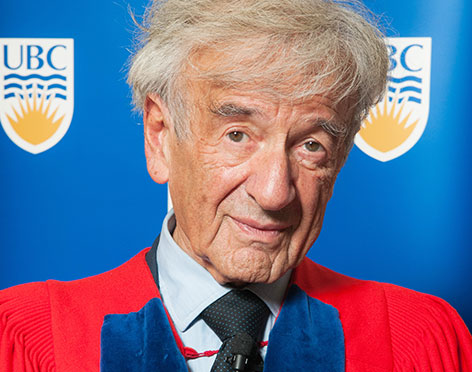 His personal experience of the Holocaust led him to use his talents as an author, activist, professor and storyteller. Professor Wiesel is a tireless defender of human rights and peace throughout the world. In 1986, he received the Nobel Peace Prize for his message of atonement and remembrance.

After the war, Professor Wiesel studied at the Sorbonne in Paris. He eventually became a journalist and worked in Paris. In the mid1950s, he ended his silence about the death camps with his memoir, Night. The memoir has since been translated into more than 30 languages with millions of copies sold. A prolific writer, Professor Wiesel has since published more than 60 award-winning books.

Professor Wiesel has spent much of his life speaking out on behalf of the defenceless, including victims of apartheid, Argentina’s Desaparecidos and the people of Bosnia, as well as Darfur. Professor Wiesel has taught in many roles at different universities. Since 1976, he has been Andrew W. Mellon Professor in the Humanities at Boston University where he is also a faculty member in the departments of religion and philosophy. In 2002, Boston University created the Elie Wiesel Center of Jewish Studies in his honour.

Madam Chancellor, for his tireless quest for human dignity and peace in the world, I ask you to
confer the degree of Doctor of Laws, honoris causa, upon ELIE WIESEL.