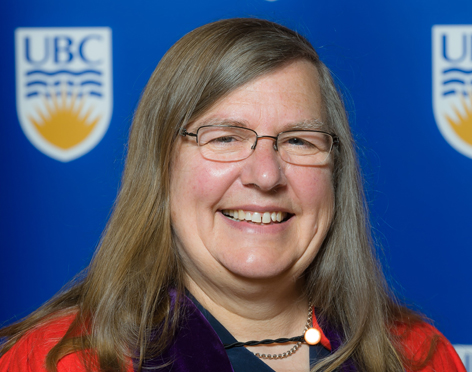 MADAM CHANCELLOR:  To her colleagues, Nancy Turner is synonymous with the field of ethnobotany – the study of the relationship between people and plants.

But to the many elders and youths in British Columbia’s First Nations communities whom Prof. Turner has worked with over the past three decades, she also personifies the best in human relationships – ones that are deeply rooted in mutual respect and understanding.

Prof. Turner is recognized worldwide for her pioneering work in documenting the traditional use of plants among Aboriginal peoples, and for her tireless efforts in ensuring the continuity of that knowledge in these communities. Through her work, Prof. Turner has provided extraordinarily rich accounts of the lives, loves, fears, and joys of different cultures that may have otherwise been lost forever.

Known for her enormous energy and subtle charm, she’s been called an anthropological magician, with an ability to incite curiosity and excitement from those around her. But perhaps she can be most aptly described as a citizen-scientist, the rarest among us who embodies a commitment to scientific rigour, respectful collaboration, and community betterment.

Prof. Turner was elected to the Royal Society of Canada and appointed to the Order of British Columbia in 1999. She was voted one of the Top Ten Thinkers in British Columbia in 2000, and she was appointed to the Order of Canada in 2009. Her long and intimate involvement with scholarship here at UBC, starting with her doctoral studies here in the 1970s, has benefited students and colleagues alike.

Madam Chancellor, for building relationships between people and the environment and between diverse peoples, I ask you to confer the degree of Doctor of Science, honoris causa, upon Nancy Jean Turner.