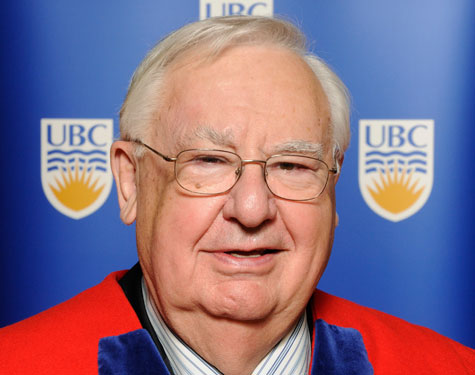 One of the most essential economic imperatives in the history of our nation has been the responsible stewardship of our forest industries, a challenge to which Michael Apsey has contributed more than perhaps any other Canadian.

After graduating from the UBC Faculty of Forestry, he began his career in the provincial government’s Department of Industrial Development, Trade and Commerce. A short time later, he was recruited by Vancouverbased forestry company Macmillan Bloedel, where he further honed his skills as an analyst by conducting studies and recommending strategies for the export of forest products to world markets.

He traveled to Turkey in 1968 to work for the Food and Agriculture Organization of the United Nations to prepare a longrange development plan for that nation’s pulp and paper industry.

He returned home to British Columbia in 1970 to serve as a vicepresident of the Council of Forest Industries, an organization he would later serve as President and Chief Executive Officer, but not before undertaking leadership assignments within a myriad of public and private organizations, including a term as provincial Deputy Minister of Forests.

Today, Michael Apsey is clearly one of Canada’s most influential and respected forestry professionals, whose extensive experience encompasses all manner of public and international service.

His career has also been highlighted by a clear devotion to the principles of sustainability. To that end, he has given invariably of his time and energy to an enormous range of industry and public organizations, and continues to serve as a board member of several.

Madame Chancellor, in recognition of a lifetime of dedication to the forest industry and the promotion of sustainable forests across Canada, I ask you to confer the degree of Doctor of Laws, honoris causa, upon Michael Apsey.