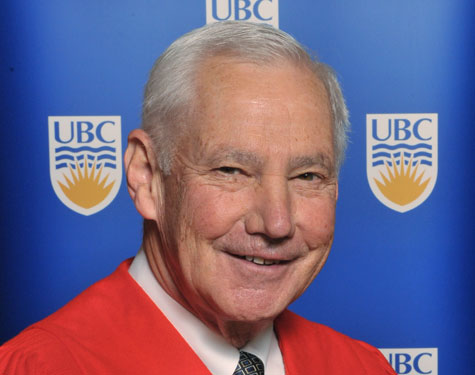 It is with great pleasure that I present Dr. Stanley Falkow, a professor of Microbiology and Immunology at the Stanford University School of Medicine who has earned worldwide recognition for his research into understanding how bacterial agents cause infection and disease.

He is sometimes referred to as the father of molecular microbial pathogenesis – the study of how infectious microbes and host cells interact to cause disease at the molecular level.

One of his first groundbreaking discoveries was that packets of genetic material, called plasmids, carry a single gene that makes bacteria resistant to antibiotics.

He also pioneered the study of the trillions of non-disease-causing germs that inhabit humans, a field now recognized as so important that the United States National Institutes of Health has launched the Human Microbiome Project to identify and characterize them.

Dr. Falkow earned his Ph.D. from Brown University. Following the completion of his graduate studies, he went on to become a staff member at the Walter Reed Army Institute of Research in the Department of Bacterial Immunology.

In 1966, he went to Georgetown University School of Medicine as a professor of microbiology, and later to a similar position at the University of Washington, before joining the faculty at Stanford in 1981.

He is an elected member of the Institute of Medicine; the National Academy of Sciences; the National Academy of Arts and Sciences, and an elected Fellow of the American Association for the Advancement of Science. He was also elected into the Royal Society as a Foreign Member and has twice been nominated for a Nobel Prize in Medicine. In September of last year, he was one of five scientists awarded the prestigious Lasker Award for medical research.

Madame Chancellor, in recognition of his extraordinary contributions to science, to the global research community and to humankind, I ask you to confer the degree of Doctor of Science, honoris causa upon Stanley Falkow.