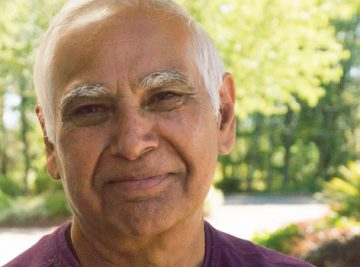 As a UBC faculty member from 1987 to 2008 in the Department of Asian Studies, he played a major role in developing the Punjabi language program’s original curriculum materials and pedagogical models that remain widely used today.

During a five decades-long literary journey, he has written numerous books in both English and Punjabi, including books of stories, poetry, plays and a novel, as well as translations, research and edited works, and for many years served as editor of the Punjabi Literary magazine Watan – “Homeland”. His works are included in more than fifty anthologies published in Canada and India.

He has also taken a leadership role in organizations to further advance Punjabi literature and language education in British Columbia and Canada. These include the Punjabi Cultural Association, the Punjabi Literary Association and the Punjabi Language Education Association, which was formed in the early 1990s to advocate for the teaching of Punjabi in British Columbia schools. He has also served on the Advisory Committee for the Vancouver-based Dhahan Prize for Punjabi Literature and sat on the BC Arts Board from 1993 to 1995.

Mr. Vice-Chancellor, in recognition of tireless leadership and immense contributions to Punjabi language and literature at this university and throughout our province and country, I ask you to confer the degree Doctor of Letters, honoris causa, upon SADHU BINNING.