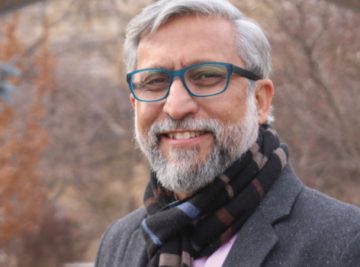 MR. CHANCELLOR, Ali Kazimi is an award-winning documentary filmmaker, author and media artist, whose films have been celebrated at festivals around the world.

He is also Associate Professor of Cinema and Media Arts in the School of Arts, Media, Performance and Design at York University. His body of work tackles complex issues of race, social justice, migration, history and memory.

In particular, his work has grappled with the South Asian immigrant experience in Canada, and perhaps most compellingly in the 2004 film Continuous Journey, which recounts the 1914 incident in which the Komagata Maru, a vessel filled with South Asian immigrants, was turned away in Vancouver Harbour.

His engaging and haunting film about the Komagata Maru takes on the history of the ship, the experience of its passengers, and the reality of anti-Asian racism in Canada in the early decades of the twentieth century as well as its relevance today.

He has also engaged interculturally with Canadian Indigenous experiences, such as in the pioneering and influential documentary, Shooting Indians: A Journey with Jeffrey Thomas, about a self-described urban Iroquois photographer.

Mr. Chancellor, in recognition of his achievements as an author and filmmaker, and for casting a light on the gaps in race, indigeneity and immigration history in this country, I ask you to confer the degree Doctor of Letters, honoris causa, upon ALI ASGHAR KAZIMI.