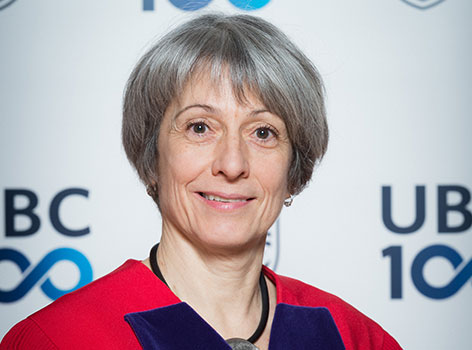 Mr. Chancellor, Rachel Thibeault is an influencer of global health and human rights policy and has made extraordinary contributions to improving the lives of those in marginalized and inhumane circumstances.

As an occupational therapist, professor, community developer and activist for health and social justice, she has worked for over three decades with population groups that face overwhelming stigma, including victims of war in Sierra Leone, persons with AIDS in Zambia and leprosy in Ethiopia, and with physical disabilities in Nicaragua.

In pursuit of a greater goal to advance civil society, her approach goes beyond strict rehabilitation measures, and builds on the principles of sustainable livelihoods, service integration, engagement in meaningful occupations and social inclusion.

Dr. Thibeault has effectively applied these principles through community re-integration programs and small business development using microcredit initiatives, all widely applauded by notable organizations that include the Canadian International Development Agency, the World Health Organization, the World Bank and the US State Department.

In 2008 she was named an official member the United Nations International Association of Millennium Development Goals Trainers, an organization comprised of renowned experts, specializing in the important work of the UN Millennium Project.

Closer to home, she has assisted marginalized groups in Canada, including developing a program for soldiers suffering from post-traumatic stress disorder, and another for aboriginal health and elder care in Arctic communities.

Dr. Thibeault is also an academic leader in the occupational therapy and occupational science disciplines as a Professor in the School of Rehabilitation Sciences at the University of Ottawa. In 2003, she received the Award for Excellence in Teaching from the University of Ottawa, and in 2007 she was awarded the National Capital Award for Excellence in Teaching by the Ottawa Centre for Research and Innovation.

Mr. Chancellor, in recognition of her accomplishments as a community builder, activist and educator, I ask you to confer the degree Doctor of Science, honoris causa, upon Rachel Thibeault.