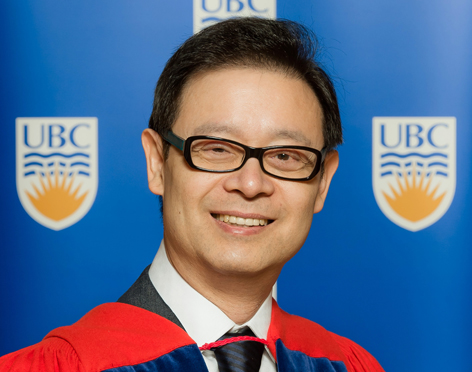 MADAM CHANCELLOR:  When we first arrive in a strange land or a new place, we seek the familiar – stories or faces that reflect our lives.

Thomas Fung understands the need for such reflections.

Mr. Fung is the founder of Canada’s premier and only national Chinese-language TV and radio network. His company, Fairchild Media Group, provides a platform for political and cultural discourse in languages that otherwise would not be available.

Mr. Fung received the inaugural Spirit of Vancouver Leadership Award from the Vancouver Board of Trade. He was named one of Canada’s most influential people by Time Magazine.

Mr. Fung is known for his generosity and kindness to those who work for him. As well, he frequently gives of his time, energy and resources for worthwhile causes. One such effort was the Community Care Foundation which raised hundreds of thousands of dollars for Lower Mainland hospitals.

His love of film and media inspired him to establish scholarships for UBC’s film and theatre department and the Graduate School of Journalism.

Madam Chancellor, for his keen business sense and even keener love of community, I ask you to confer the degree of Doctor of Laws, honoris causa, upon Thomas Wing Fat Fung.