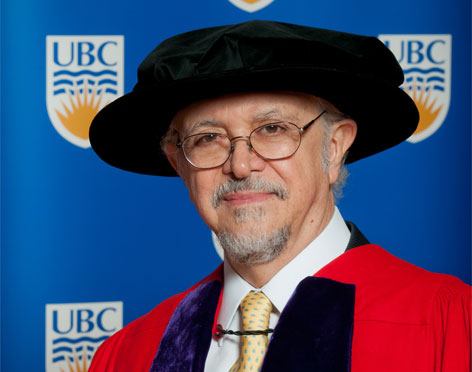 When Mario Molina was a child, he created a makeshift laboratory in his family home to conduct chemistry experiments with a toy microscope.

Now, I don’t mean to suggest that committing yourself early to science necessarily guarantees you the Nobel Prize for Chemistry – which he received in 1995 with two colleagues – but let’s just say it certainly doesn’t hurt.

Because not long after his early embrace of chemistry, Mario Molina co-authored one of the truly landmark studies of our times. Published in Nature journal in 1974 – while he was still a post-doctoral fellow at the University of California, Irvine – his research suggested that a class of chemicals  – chlorofluorocarbons, once ubiquitous in refrigerators, aerosol spray cans and solvents – could compromise the ozone layer’s ability to block the sun’s harmful ultraviolet rays.

Not only did his work advance our understanding of atmospheric chemistry, it also had a profoundly positive impact on the environment: Those of us here of a certain age surely still have the indelible image of ominous holes growing in the ozone layer imprinted in our minds from this time. Mario Molina’s work captured the imagination of scientists, the public and government – and inspired real change in the form of a global ban on CFC emissions.

Since then, he has been involved with the chemistry of air pollution of the lower atmosphere, and with the science and policy of climate change. He has received more than 30 honorary degrees and his many memberships include the U.S. President’s Committee of Advisors in Science and Technology, and the Pontifical Academy of Sciences of the Vatican. He is a currently a professor at the University of California, San Diego, and President of the Mario Molina Center in Mexico City, where he was born.

Madam Chancellor, for his immense contributions to society and our planet, for reminding us of the power of research to transform the world, and for inspiring the type of thinking that led this university to recently open North America’s greenest building here on the Vancouver campus, I ask you to confer the degree of Doctor of Science, honoris causa, upon Mario José Molina.