His Highness the Aga Khan’s Citation 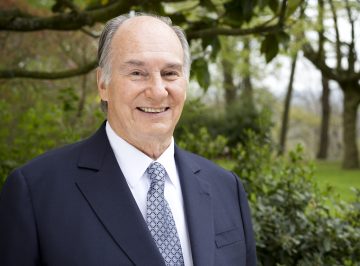 Santa Ono, President and Vice-Chancellor, The University of British Columbia

Your Highness, Your Honour Lieutenant-Governor Austin, Chancellor and Governors of UBC and SFU, friends of our two universities and of the Ismaili community:

I am deeply honoured today, with my esteemed colleague, SFU President Andrew Petter, to welcome and present His Highness the Aga Khan IV, Imam of the world’s Shia Ismaili Muslims. We are gathered today to confer honour upon His Highness. Specifically – and for the first time in our two institutions’ history – we are here to confer honorary degrees from both of our universities.

The honorary degree is the highest honour that a university can bestow, one that recognizes the accomplishments and contributions of an exceptional individual. In honouring a candidate of eminence and excellence, we also offer a public illustration of our own values and ambitions. We do so to inspire our graduates and our community. To this end, I can think of no candidate who so deserves this unprecedented joint recognition than His Highness the Aga Khan.

Speaking from the perspective of my own university, UBC has defined its purpose as:

“Pursuing excellence in research, learning and engagement to foster global citizenship and advance a sustainable and just society across British Columbia, Canada and the world.” Related to that pursuit, our vision is: “Inspiring people, ideas and actions for a better world.”

Who, in that regard, could be a better exemplar than His Highness the Aga Khan? The Aga Khan Development Network – the AKDN – works in more than 30 countries. Operating roughly 1,000 programmes and institutions, it employs more than 80,000 people and invests more than $1 billion, every year, in non-profit development activities.

This is a profound example of global citizenship, and one that is inclusive of race and ideology. The AKDN is guided by the ethical principles of Islam, particularly consultation, solidarity with those less fortunate, self-reliance and human dignity. But the Aga Khan’s leadership is not restricted to a particular community, country or region. Rather, the AKDN focuses on the poor and vulnerable – although, as many UBC students and graduates can attest, it also supports programmes in Europe and here in North America. Working with every religion, race, ethnicity and gender, pluralism is a central pillar of the AKDN’s ethical framework. We are, again, inspired by this example.

His Highness Prince Karim Aga Khan is the 49th Imam of the Ismaili Muslims. In that role, he is the spiritual leader of the 15 million Ismailis, a multi-ethnic community dispersed among more than 25 countries, including South and Central Asia, Africa, the Middle East, Western Europe and North America. There are more than 100,000 Ismailis in Canada.

Renowned for the good works of the AKDN, the Aga Khan has demurred when people call him a philanthropist. He says, rather, that his mandate requires that he use the office of the Ismaili Imamat which he inherited to improve the quality of life for the world’s most vulnerable. He presents his work not as an act of generosity but as the exercise of his responsibility. If we all took the same view in our own lives, it would be a better world.

Born Prince Karim Aga Khan, in Geneva, Switzerland, on December 13, 1936, the Aga Khan is the eldest son of Prince Aly Khan and his first wife, Princess Tajuddawlah. It is believed that the Aga Khan is a direct descendant of the Prophet Muhammad, through the Prophet’s daughter Fatima az-Zahra and her husband, and Muhammad’s cousin, Ali, who was the first Imam in Shia Islam.

On July 11, 1957, at just 20 years of age, the young prince was elevated to the role of Imam. The prince’s grandfather, Sir Sultan Mohamed Shah Aga Khan III, who had served as Imam for the previous 72 years, said he was designating his grandson because, and here I quote from the late Imam’s will itself:

“I am convinced that it is in the best interest of the Shia Ismaili Muslim Community that I should be succeeded by a young man who has been brought up and developed during recent years and in the midst of the new age and who brings a new outlook on life to his office as Imam.”

In more than 60 years of service, His Highness the Aga Khan IV has proved the wisdom of his grandfather’s choice.

As with UBC, Simon Fraser University is committed to the values of education, pluralism and global citizenship as drivers of social betterment. But SFU’s association with the example of His Highness the Aga Khan also relates to two other dimensions.

First, SFU aspires to be Canada’s most community-engaged research institution, for the benefit of our students and of the communities we serve. And I can think of no better demonstration of the value of community engagement than that demonstrated by the Aga Khan Development Network.

Second, we at SFU have committed ourselves to marshaling university resources to build social capital and promote community betterment, a goal that has been evident in the Aga Khan’s priorities for more than half a century.

The AKDN advancement of education is, perhaps, the most obvious illustration of this priority. The network engages more than two million learners a year, including 750,000 in early childhood development and more than a million at the elementary and high school levels through the Aga Khan Schools and Aga Khan Academies.

At the post-secondary level, the Aga Khan University and the University of Central Asia proudly claim 15,000 alumni, including doctors, nurses, teachers and school managers who are raising standards and playing leading roles in their fields and communities.

In the area of health, the AKDN supports a network of hospitals, including the Aga Khan University Hospital in Nairobi, considered one of the best on the continent. The AKDN is also a leading supporter of health research, especially in areas such as tuberculosis that affect vulnerable populations.

In support of civil society, the Aga Khan Rural Support Programmes have employed grassroots democracy, participatory governance and pluralism as the springboard for improving the conditions of more than 8 million people living in poor, rural areas. And the AKDN supplies agricultural aid to more than 100,000 cotton farmers, while its social programmes offer microfinance, education, health and sanitation support.

In the category of humanitarian assistance, the AKDN is often one of the first on-the-ground responders after a natural or human-caused disaster, and one of the last to leave, working on long-term redevelopment for the benefit of all those affected. It frequently applies that same focus in remote and fragile geographies, working to reduce poverty, ensure food security and improve the livelihoods of smallholder farmers and their families.

Also in the realm of social infrastructure, the Aga Khan Trust for Culture has shown how culture can be a catalyst for improving the quality of life. The Aga Khan Historic Cities Programme conducts complex restoration and conservation projects. It creates parks and gardens, and it plans and operates cultural assets from Afghanistan to Zanzibar. In fact, His Highness earlier this week inaugurated the Aga Khan Garden in Edmonton, bringing to Canada some of the extraordinary cultural legacies of Muslim civilizations.

In an area where culture, education and social infrastructure intersect, the Aga Khan supports the Aga Khan Award for Architecture. Since 1977, this has been one of the world’s pre-eminent architectural awards, focused on everything from village planning to environmental sanitation.

In addition to a vast array of not-for-profit initiatives, the Aga Khan has also established the Aga Khan Fund for Economic Development, which invests in ethically run, self-sustaining companies that create employment, provide essential goods and services, and promote economic development.

The Fund underwrites entrepreneurs and development, from an award-winning mobile phone company in Afghanistan to hydroelectric plants that provide half the electricity to Uganda – a country, by the way, that ejected the whole Ismaili population in 1972. This is a leader who has much to teach us about truth and reconciliation.

And so we say again, in looking to that remarkable record, and in celebrating the alignment of our values, it is clear that His Highness the Aga Khan is richly deserving of the honours we bestow today.

We, in turn, are profoundly honoured by the association with His Highness that these honours provide to our two institutions.