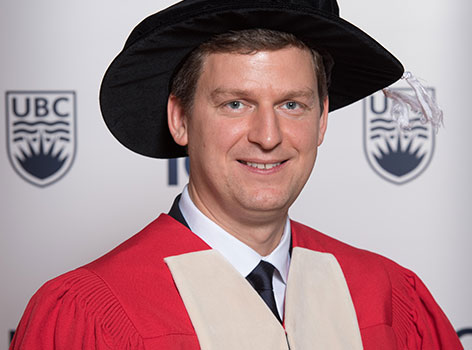 Mr. Chancellor, James Ehnes is an acclaimed and internationally renowned violinist, and among the world’s most sophisticated and accomplished classical musicians of his generation.

Mr. Ehnes began violin studies at the age of four, and at age nine became a protégé of the noted Canadian violinist Francis Chaplin. He later studied at The Juilliard School, where upon graduation he was awarded the Peter Mennin Prize for Outstanding Achievement and Leadership in Music.

Today, he maintains an active professional career as a soloist, recitalist, and chamber musician who has performed in over 30 countries on five continents, and appears regularly in the world’s great concert halls and with many of the most celebrated orchestras and conductors.

His international performances in the past year alone have included concerto solo performances with the Royal Philharmonic Orchestra, the Danish National and the Melbourne, Sydney, San Diego and Washington DC National symphony orchestras.

His extensive discography includes over 35 recordings, many of which have been honoured with international awards and prizes, including a remarkable ten Juno Awards and a 2008 Grammy Award for Best Instrumental Soloist with Orchestra.

In 2007, at just 31 years of age, he became the youngest person ever elected as a Fellow to the Royal Society of Canada.

I am pleased to note that he maintains a regular presence in our region, as a guest artist of the Vancouver Symphony Orchestra, by occasionally leading master classes for students in the UBC School of Music, and by serving since 2011 as Artistic Director of the Seattle Chamber Music Society.

Mr. Chancellor, in recognition of his achievements as an artist and his contributions to the cultural fabric of Canada, I ask you to confer the degree Doctor of Letters, honoris causa, upon James Douglas Ehnes.