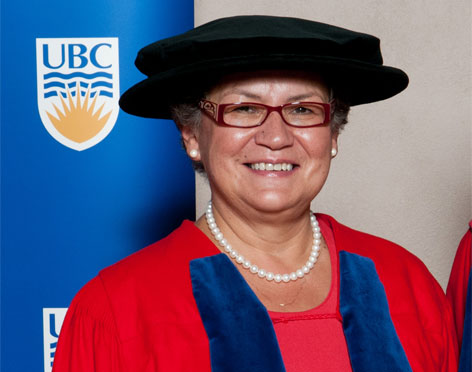 When Sophie Pierre was three years old, living in the Kootenays, her grandfather gathered his people to determine who would succeed him as Chief.

Little did she know, sitting there listening to her grandfather, that one day she too would follow his footsteps as Chief, on her way to becoming one of Canada’s most accomplished Aboriginal leaders.

Chief Pierre currently holds the challenging position of Chief Commissioner of the B.C. Treaty Commission, where she works to resolve contentious land-claims negotiations. Prior to that, she was the elected Chief of the St. Mary’s Indian Band for 30 years, spent more than 25 years on the Ktunaxa-Kinbasket Tribal Council and served as co-chair of the First Nations Summit.

Chief Pierre was instrumental in the creation of the St. Eugene Mission Resort Hotel on the traditional land of her people outside Cranbrook, B.C. Once a residential school, this re-developed facility is now an important multi-million dollar driver of economic growth in her community, helping to transform a painful past into a source of pride and independence.

UBC has a long history of Aboriginal education programming, and Chief Pierre has been one of its great supporters. She was instrumental in the creation and continued success of the Ch’nook Program, a business and mentoring initiative for young Aboriginal entrepreneurs at UBC.

Chief Pierre, who Assembly of First Nations Chief Shawn Atleo has called “an amazing woman and leader,” has served on numerous boards and is a recipient of both the Order of British Columbia and the National Aboriginal Achievement award.

Madam Chancellor, for these and other contributions to Aboriginal people across the nation, and for enriching the lives of all Canadians, I ask you to grant the degree of Doctor of Laws, honoris causa, upon Chief Sophie Pierre.