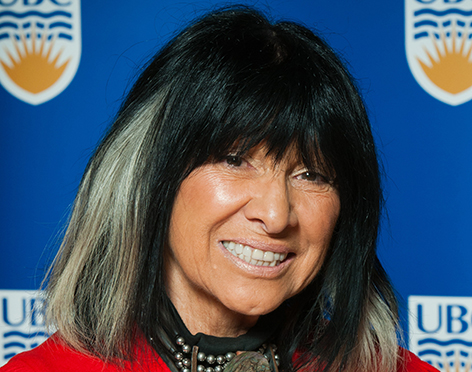 Buffy Sainte-Marie is an iconic musician, artist, social activist and educator who has left her mark on the world stage. Her award-winning music is loved equally by people from North America, Europe, Asia and Australia. She has advocated on behalf of Aboriginal people and spoken out against war.

Born in Saskatchewan and of Cree heritage, Dr. Sainte-Marie – who holds a PhD in Fine Arts –grew up in the United States. She began her wildly successful musical career in the 1960s. Since then, songs like Universal Soldier, Up Where We Belong, and Until It’s Times for You to Go have become international hits.

Dr. Sainte-Marie continues to leave her mark on music and the arts today. She is the recipient of an Academy Award, a Golden Globe, a Gemini and three Junos, most recently for her 18th album Running for the Drum in 2009.

Having spent time with indigenous groups around the world, Dr. Sainte-Marie makes a special effort to bring her music into their communities. She has established a scholarship foundation to fund Native American study and is the founder of the Cradleboard Teaching Project, which aims to enrich the public education system with Native American content. And during a stint on Sesame Street, Dr. Sainte-Marie wanted to impart that “Indians still exist.”

An Officer of the Order of Canada, Dr. Sainte-Marie has made contributions to the visual arts and to education, as a professor and lecturer at universities in Canada and the United States.

Madam Chancellor, for her powerful music, her role as an educator and for her dedication to causes that touch all of us, I ask you to confer the degree of Doctor of Letters, honoris causa, upon Buffy Sainte-Marie.