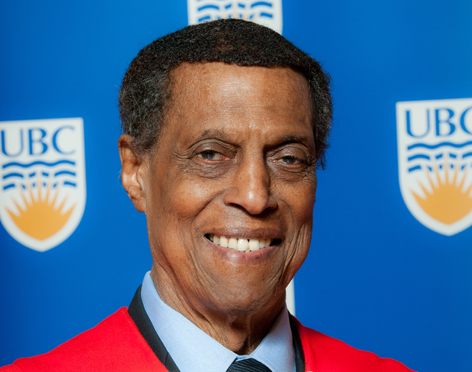 MADAM CHANCELLOR:  British Columbia has an important musical and cultural treasure in the person of Leon Bibb. A distinguished actor, folk singer, and advocate for minority rights, Mr. Bibb began his career with a generation of performers who were at the forefront of social change.

Born in Louisville, Kentucky, he pursued classical training as a baritone in New York. He made his first major theatre appearance in the original 1946 production of Annie Get Your Gun, starring Ethel Merman.

Bibb turned to folk music, and was heard, along with such luminaries as Pete Seeger, on the 1954 album Hootenanny Tonight!. He performed in the inaugural Newport Folk Festival, the Broadway production of Kurt Weill’s Lost in the Stars and he also appeared as a member of the Skifflers, in tandem with folk music legend Milt Okun.

In 1971 he moved to Vancouver. His contribution to the B.C. arts community has been fundamental. He helped establish the success of the Vancouver Arts Club Theatre when he obtained the rights to Jacques Brel is Alive and Well and Living in Paris. Among his many other career highlights, his One More Stop on The Freedom Train, a gospel musical about the underground railroad, was premiered in Toronto and mounted in Vancouver at Expo 86.

In 1992 Mr. Bibb founded A Step Ahead, a program that provides youth with a forum to discuss diversity, racism, bullying and multiculturalism. This program has been performed in more than 120 schools in Canada.

He is an inductee into the B.C. Entertainment Hall of Fame, a Queen Elizabeth II Golden Jubilee Medal recipient, and in 2009 was appointed to the Order for British Columbia.

Madam Chancellor, for sharing his extraordinary talent and inspiration, I ask you to confer the degree of Doctor of Letters, honoris causa, upon Leon Bibb.