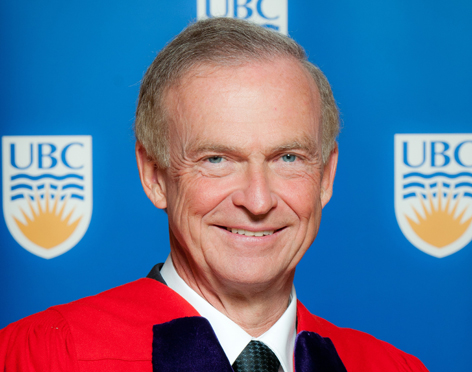 MADAM CHANCELLOR:  A celebrated Vancouver biomedical engineer, James McEwen’s leadership and expertise have spread far beyond the Lower Mainland, benefitting Canadians and people around the world.

Best known for the microprocessor-controlled automatic surgical tourniquet system he invented, Dr. McEwen and his team have developed numerous medical devices that have changed the way health care is delivered in Canada and internationally.

The tourniquet system is now standard equipment in operating rooms worldwide and is used in an estimated 20,000 surgical procedures every day.  It works to protect patients by improving the precision, speed and safety of surgery.

A UBC alumnus, Dr. McEwen is considered one of the founders of the Canadian biomedical engineering industry. He helped establish several medical technology companies, invested in many others and was a driving force behind the creation of biomedical engineering programs here at UBC and at Simon Fraser University.

Having held many positions of leadership throughout his career, Dr. McEwen’s guidance and foresight have led to the creation of partnerships between hospitals, universities, industry and non-profit organizations.

These partnerships have helped boost the Canadian economy. They have supported students as they work towards becoming Canada’s future biomedical engineers and they have laid the groundwork for developing new medical technologies that address the needs of patients and health care professionals.

Madam Chancellor, for developing new medical technologies, for guiding the growth of Canada’s biomedical engineering fields and for helping improve health care, I ask you to confer the degree of Doctor of Science, honoris causa, upon James Allen McEwen.