We are pleased to share that UBC’s Fall 2021 graduation ceremonies will be delivered in person on campus. All ceremonies will take place at the Chan Centre for the Performing Arts from Tuesday, November 23 – Friday, November 26. Virtual graduation ceremonies for the Class of 2020 and the Class of 2021 were held in June 2020, November 2020 and June 2021. Archived ceremonies for Vancouver graduates can be found here and for Okanagan graduates they can be found here. Alumni from these graduating classes will be invited back to campus for an in-person celebration in 2022, and more details will be provided in due course. 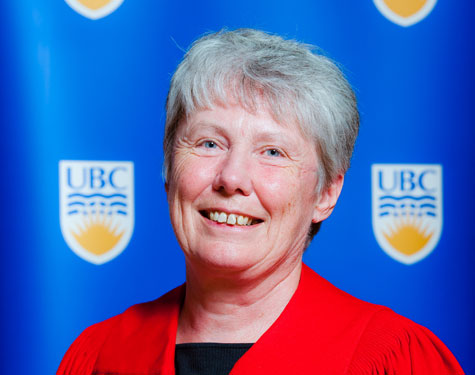 Few individuals have done more to encourage and advance women in science and
engineering than Dr. Maria Klawe, and we are honoured to call her one of our own.

As head of the Department of Computer Science, Vice President, Students and Dean of
Science at UBC, Dr. Klawe pioneered strategies to support women and underrepresented
groups in science and engineering.

She then went on to serve as Dean of Engineering at Princeton University, where
she developed the “Engineering for a Better World” strategic plan for the School of
Engineering and Applied Science.

Since 2007, Dr. Klawe has been President of Harvey Mudd College, a top undergraduate
engineering school in the U.S., where she is fostering curricular changes that emphasize
experiential learning and the societal value of engineering. She knows the school’s 700
students by name and writes a personal note to every woman who is accepted into the
college. Due in large part to her efforts, the percentage of incoming women has increased
to 40 per cent.

Her far-reaching influence is reflected in the formation of the Image of Computing
Initiative, a national effort to convey a positive image of computing co-led by Microsoft
and major industry players. Her own research on factors that engage girls in computer
games has also been influential within the gaming sector.

She has been elected to the American Academy of Arts & Sciences and served as the first
female vice-chair of the Computing Research Association, and as Chair of the Board of
Trustees of the Anita Borg Institute for Women in Technology.

Madame Chancellor, for her visionary leadership and unwavering support of students and
colleagues, I ask you to confer the degree of Doctor of Laws, honoris causa, upon Maria
Margaret Klawe.