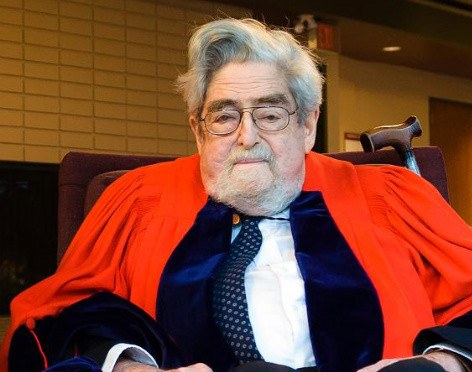 Dr. Louis Nirenberg is one of the outstanding mathematical analysts of the twentieth
century.

A former director and professor of mathematics at New York University’s Courant
Institute of Mathematical Sciences, he received the National Medal of Science in 1995 –
the highest scientific honour in the United States.

We take pride, then, that one who has had such a major impact came from Canada.
Dr. Nirenberg was born in Hamilton and grew up in Montreal, where he earned his
undergraduate degree at McGill University.

He is quoted as saying that he discovered his love for math while attempting to learn
Hebrew. His Hebrew teacher liked mathematical puzzles, and language lessons ended
up being spent on math problems. We can be glad they did, for those lessons must have
planted the seeds that would one day bear tremendous fruit.

Dr. Nirenberg has made major contributions in the area of partial differential equations.
He developed intricate interactions between mathematical analysis, differential geometry,
and complex analysis and applied them to the theory of fluid flow and other physical
phenomena.

Among his many activities, Dr. Nirenberg was elected to the National Academy of
Sciences in 1969, served as Vice President of the American Mathematical Society
from 1976 to 1977, has edited dozens of prominent journals and was elected as Foreign
Correspondent of the Academie des Sciences de France in 1989.

Madame Chancellor, for his immense contributions to the mathematical tools of modern
science, I ask you to confer the degree of Doctor of Science, honoris causa, upon Louis
Nirenberg.