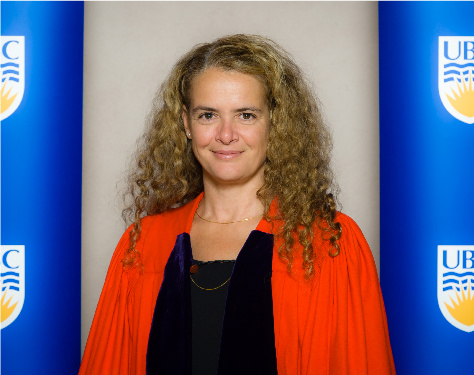 Few people have accomplished so much, so high up, as Dr. Julie Payette.

Dr. Payette has been to space twice for a total of more than 25 days.

During her first flight with the Space Shuttle Discovery in 1999, she made aerospace history as the first Canadian to participate in an International Space Station mission. During this mission, the crew performed the first manual docking of the shuttle to the International Space Station. Dr. Payette held responsibility for the station’s systems and operated all three robotic arms: the shuttle’s Canadarm, the station’s Canadarm2 and a special purpose Japanese arm.

Dr. Payette then visited the space station in 2009 aboard the Space Shuttle Endeavour, and made history again when she and astronaut Bob Thirsk marked the first time that two Canadians were in space at the same time.

In between her space travels, Dr. Payette served as Chief Astronaut with the Canadian Space Agency from 2000 to 2007. Here on Earth, she recently helped carry the Olympic flag during the Opening Ceremony of the 2010 Olympic Winter Games Vancouver. A person of many talents, she also plays the piano and has sung with the Montreal Symphony Orchestra, the Piacere Vocale in Basel, Switzerland, and the Tafelmusik Baroque Orchestra in Toronto.

Throughout her career, she has encouraged boys and girls of all ages to believe in their dreams.

Madame Chancellor, for inspiring us all to reach for the sky, I ask you to confer the degree of Doctor of Science, honoris causa, upon Julie Payette.