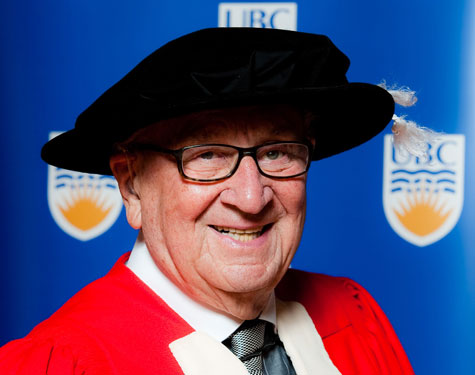 Forgive me if I can’t help but tap my toes a little.

It’s just that, for many British Columbians, the great sound of the Big Band era is synonymous with one man: musician and bandleader Dal Richards.

Mr. Richards first started playing music in the late 1930s after graduating from Kerrisdale’s Magee High. And I am happy to report that 75 years later, Vancouver’s coolest 92-year-old is still going strong.

If you wanted to dance and be seen in the 1940s, 50s or 60s, you went to the Panaroma Roof at the Hotel Vancouver where a young band of hep-cats called the Dal Richards Orchestra drove crowds crazy every Saturday with their infectious mix of rock and roll, pop, swing and big band classics. Their shows at the Roof were broadcast across the country by the CBC.

Since then, Mr. Richards has performed at the PNE for 70 consecutive years, led the BC Lions Football Club half-time shows for 25 years, been the star of two documentaries, and hosted his long-running weekly radio show every Sunday night. He still plays concerts, weddings, fund-raisers, festivals and has had a New Year’s gig for 72 consecutive years.

Mr. Richards, or “Dr. Swing” as he’s been affectionately called, has been honoured many times for his music and work with charities like the Variety Club. He’s a recipient of the Order of Canada, Order of British Columba, the Queen’s Golden Jubilee Medal and a BC Entertainment Hall of Fame inductee.

Madame Chancellor, for his contributions to the social and musical fabric of our city and our country, I ask you to confer the degree of Doctor of Letters, honoris causa, upon Dallas Murray Richards.