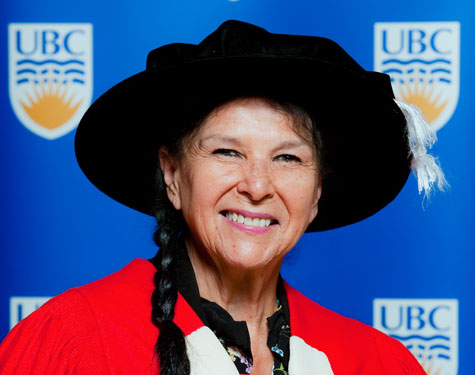 THE TITLE AND DEGREE OF DOCTOR OF LETTERS, (honoris causa) CONFERRED
AT A SPECIAL CEREMONY ON MAY 28, 2010

Dr. Alanis Obomsawin is one of Canada’s most distinguished documentary filmmakers. For more than 40 years she has directed documentaries at the National Film Board with strong social content, inspired by the desire to let the voices of her people be heard.

A member of the Abenaki Nation, she was born in New Hampshire but spent her early years on the Odanak reserve north of Montreal absorbing the songs and legends of her people. It was her later difficult experiences as the only First Nations student in her school that sparked a desire to bring change.

Dr. Obomsawin began her career as a singer, writer and storyteller, and launched into film-
making in 1967. She has made more than 30 uncompromising documentaries on issues affecting Aboriginal people in Canada.

Her film Kanehsatake: 270 Years of Resistance, made in 1993 and the first of a series about the 1990 Oka crisis, is one of her best known and has won 18 international awards. Among her many other films, she has also produced Our Nationhood, which chronicles the determination of the Listuguj Mi’gmaq people to manage the natural resources of their traditional lands.

University communities should pay attention to her 2009 film, entitled Since when do we divorce the right answer from an honest answer?, telling the story of unconventional former McGill University professor Norman Cornett.

Dr. Obomsawin is an Officer of the Order of Canada. She is a lifetime member of the Board of Directors of the Aboriginal Peoples Television Network, and a Member of the Board for the Public Broadcasting System (PBS) in Vermont and National Geographic International.

Madame Chancellor, to recognize the contributions made to our understanding of vital social and First Nations issues, I ask you to confer the degree of Doctor of Letters, honoris causa, upon Alanis Obomsawin.